While each of the five Solstice-class vessels are known for their own unique histories (Celebrity Reflection, for example, was the largest cruise ship of the five and cost an astonishing $750 million to build), Celebrity Equinox holds the honor of being captained by the first American woman to captain a mega cruise ship, Kate McCue.

Floated out in the summer of 2009, Celebrity Equinox underwent a dry dock and refit in 2019, upgrading its amenities and offerings to cruisers just a year ago.

Over her life, the Celebrity Equinox has sailed a variety of itineraries, including itineraries around the Caribbean, Bahamas and Florida. Additionally, over the course of her life, Celebrity Equinox has gained the attention of many a reputable travel brand, earning her an array of accolades. She’s received awards for Best Onboard Dining for seven consecutive years from TravelAge West Magazine and awards for Best Onboard Spa Facilities for five consecutive years from MeetMeOnboard.com.

New enhancements include the addition of The Retreat for suite guests, with The Retreat Sundeck and The Retreat Lounge (which removed Michael’s Club); the new Qsine dining experience that incorporates 4k technology for an unforgettable meal (removing Silk Harvest); a newly imagined Passport Bar; a new casual bar, Craft Social (which replaced Gastrobar); new staterooms and suites all across the ship, now with new exclusive bedding and mattresses; new Camp at Sea programming with a STEM focus; new tech, including RFID lock technology, Xcelerate WiFi and facial recognition technology within the Celebrity Cruises app; new treatments and products at the spa; and new shopping options, including offerings from Kate Spade, Swiss and John Hardy.

2. The ship also underwent a dry dock after its first five years in service; in 2014, it brought new attractions to the ship that you can still see today

In 2014, the ship was briefly dry docked for some less extensive renovations than what it saw in 2019. You can still see some of these renovations today and the new amenities this 2014 dry dock resulted in. These include Slush, a frozen drinks venue offering cool, adult beverages, as well as a few non-alcoholic slush drinks, all made with fresh, healthful ingredients.

The change also brought in a fine art photography studio, a Michael Kors boutique, new offerings from luxury brands such as Chanel and Dior and a new internet lounge.

3. Celebrity Equinox hosted a major milestone for the LGBTQ community

In 2018, Celebrity Equinox hosted a major LGBTQ event — the first LGBTQ wedding at sea with a major cruise line. Francisco Vargas and Benjamin Gray were the first same-sex couple to tie the knot aboard a major cruise ship, in a ceremony officiated by the ship’s captain, in the ship’s Blu Restaurant.

The event was only made possible after a 2017 vote in Malta, which allowed Celebrity (as most of its ships are registered in Malta) to legally recognize same-sex marriages performed onboard, by Celebrity captains, while at sea. Now, everyone can enjoy Celebrity’s Wedding Cruise package, which includes on-board and destinations weddings, event coordinator services, photography services, cake, Champagne and more.

4. The Celebrity Equinox staterooms offer a wide array of options, and none are a bad deal

On some cruise ships, if you want to save money, you’re going to have to go with one of those many, many budget interior staterooms that are available, that leave you in a cramped space, with no view and feeling a little — let’s face it — claustrophobic. However, that’s not at all the case on Celebrity Equinox.

More than a third of the staterooms are suitable for traveling families or groups, as they can accommodate three or four guests. If you want to take things a step further and upgrade from a veranda room to a suite, you can definitely do so, as there are a total of 66 suites on the ship to choose from.

5. You’ll have 11 different dining venues to try once aboard the ship

Celebrity Equinox has some of the best dining at sea (as its awards can attest). The best part, though? Six of the 11 dining options are included in the price of your cruise fare, while only five are specialty venues that require surcharges and reservations.

Included in the cruise fare, you have the Silhouette Dining Room, for a traditional cruising main dining room experience in a dramatic setting; the Oceanview Cafe, for all-day dining with indoor and outdoor seating; Cafe al Bacio & Gelateria, for traditional gelatos, pastries and coffee; the Spa Cafe, for light bites in a spectacularly soothing setting; Mast Grill & Bar for casual, poolside eats; and Luminae, for modern cuisine available to suite guests only.

Dining options that do require reservations and an extra fee include Blu, a clean cuisine eatery open to Aqua-class guests only, as well as suite guests dependent upon availability; Murano, a modern and classic continental eatery; Qsine, a dining experience that’s tech-heavy; Tuscan Grille, an Italian steakhouse; and Sushi on Five, a Japanese restaurant with a range of eats, sake and Japanese beer.

6. A unique outdoor entertainment and relaxation space is the only of its kind at sea

You’ll find a very unique entertainment and leisure space aboard Celebrity Equinox. The Lawn Club is an incredibly one-of-a-kind space for passengers to get some sun. It’s about a half acre in size and yes, it actually is a lawn, with actual grass.

The 22,927 square feet of space is situated on Deck 15 and includes its own restaurant, the Patio on the Lawn and Sunset Bar, as well as a three-hole putting course. There are also various activities to keep you entertained, such as a hot glass show, lawn bowling, croquet and bocce. And, if you just want to chill, you’ll find plenty of seating in both the sun and shade to enjoy this unprecedented space at sea.

7. The new retreat provides you space to get away from real life even more than you normally would on a cruise

The new Retreat that was recently added to Celebrity Equinox during the ship’s last round of refurbishments is a place to get away even more so than you normally might. This exclusive, VIP space is available to suite-class guests only.

8. Luxury is the key focus aboard Celebrity Equinox

Some cruise ships are built for family fun and family getaways. While Celebrity Equinox does offer plenteous programming and activities for kids, you can easily tell right away when boarding the ship that they are not the main focus. Family fun can be had, but you’ll have to look for it, versus just having it served up to you on a platter, as you might find aboard other ships or with other cruise lines.

Instead, Celebrity Equinox puts luxury at the forefront of everything the ship and cruise line as a whole does. This makes it possibly more suited for luxury adult travelers and couples who are looking for a cruising experience that’s a bit more refined.

9. The vibe is mostly low-key

If you’re looking for a loud and raucous party vibe, you won’t find that aboard Celebrity Equinox. However, that doesn’t mean that there aren’t plenty of ways for you to enjoy yourself. Rather than having a busy, busy, busy schedule of cruise day activities on the agenda, the ship rather offers a nice variety of activities, but not so many that you feel like the ship is overly active.

You’ll find pop-up parties, game shows and gambling, as well as films, karaoke and adult arts and crafts. However, you’ll find that most of your fellow cruisers are more than happy to just chill, whether by the pool, on the lawn or in one of the many bars and lounges aboard the ship.

Along these same lines, you’ll find that the bar culture aboard Celebrity Equinox is extremely varied. Whatever kind of bar or lounge you typically prefer, you’ll probably find that same atmosphere aboard the ship. For example, at Martini Bar & Crush, you’ll find high energy and elegance combined with a bit of mixology flair and some of the largest crowds you’ll find in a bar on this ship; at Quasar, you’ll find a bit of a retro nightclub feel; World Class Bar is all about the mixology; and the Sky Observation Lounge gives you great views and huge dance floor.

Unlike some other ships, which push the quiet spots found around the vessel to the back burner, making them lackluster at best, Celebrity Equinox recognizes its clientele often like a more refined, quiet space to get away. Because of this, the ship offers an expansive library, card room and even art gallery.

Also Read: 13 Things to Do on a Celebrity Reflection Cruise

What class ship is the Celebrity Equinox?

How large is the Celebrity Equinox cruise ship?

How many swimming pools are on Celebrity Equinox? 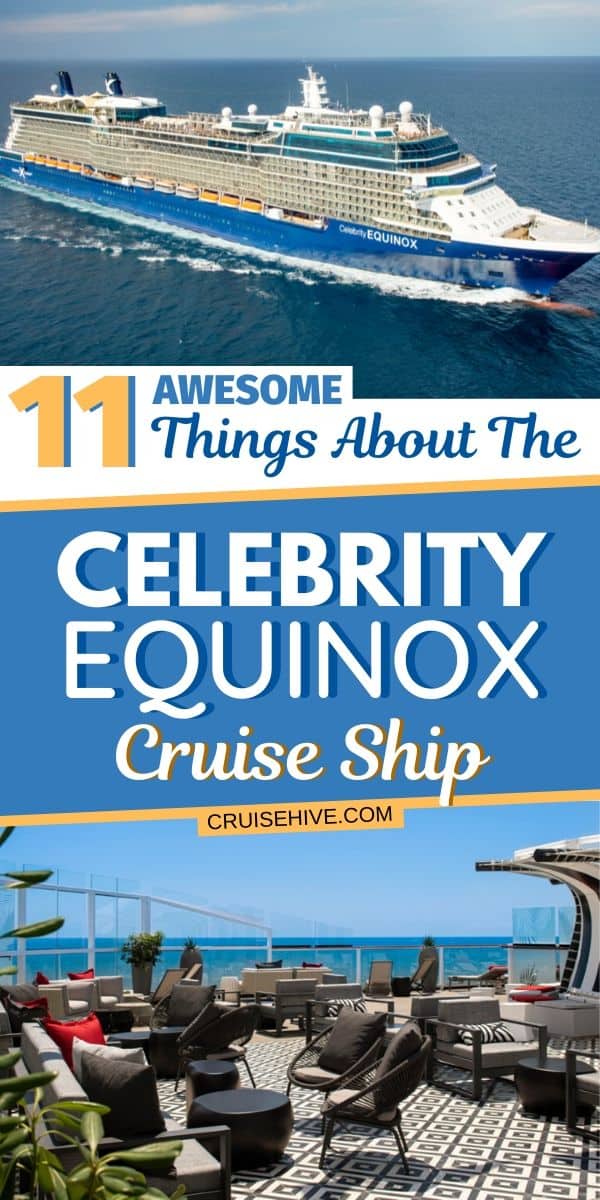