Which begs the question – why aren’t we switching to hydrogen fuel-cell cars rather than battery-electrics? That’s too complex a question to fully answer here, but part of the reason for driving the Nexo to the Frankfurt show is to interview Hyundai’s Dr Sae-Hoon Kim, who heads up its hydrogen fuel-cell business and can update us, besides testing the convenience of Western Europe’s hydrogen network. 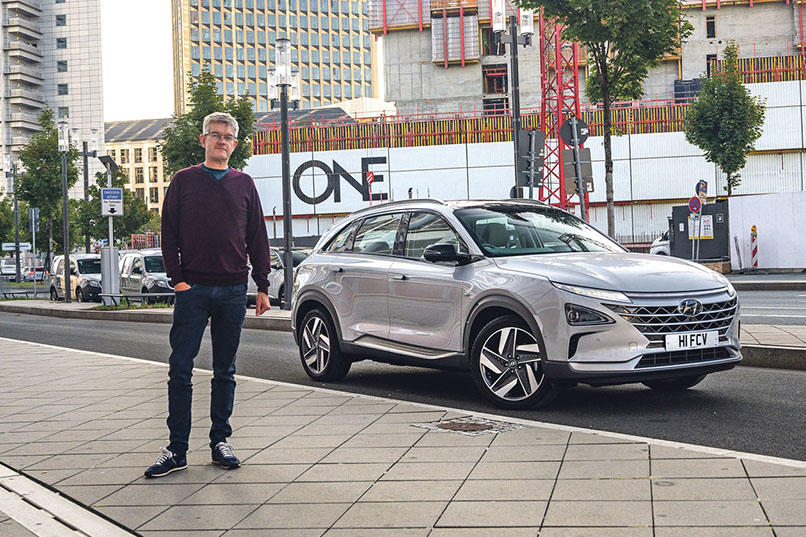 But first, there’s savouring the Nexo itself. This is certainly a more exciting machine than the iX35 that it replaces, not only because it looks good and goes further (officially, 414 WLTP miles rather than 369) but also because it is very well equipped. A 12.3in touchscreen, power heated and ventilated front seats, adaptive cruise control, parking camera, an around-view monitor, wireless phone charging, a heated steering wheel, sunroof and a general air of luxury all add to an appeal that certainly doesn’t feel save-the-planet spartan. Nevertheless, the seats are (attractively) part-trimmed with bio-fibres.

In terms of the driving, the Nexo feels just like an EV. That’s because it is: propulsion comes from a 161bhp, 291lb ft electric motor driving the front wheels. The difference is that the amperes are supplied not by a battery but by a fuel-cell stack, supported by a fairly small battery that supplements its output during moments of heavy demand. The combination provides a steady stream of power and decently brisk acceleration to 60mph, after which it begins to tail off. The tailing off is especially noticeable at 85mph on de-restricted autobahns, when accelerating beyond this speed is occasionally necessary if you’re not to be baulked. At this pace, the Nexo struggles to keep up with hard-charging Benzes and BMWs, but in Britain it’s entirely adequate – if nothing like a ludicrous Tesla. 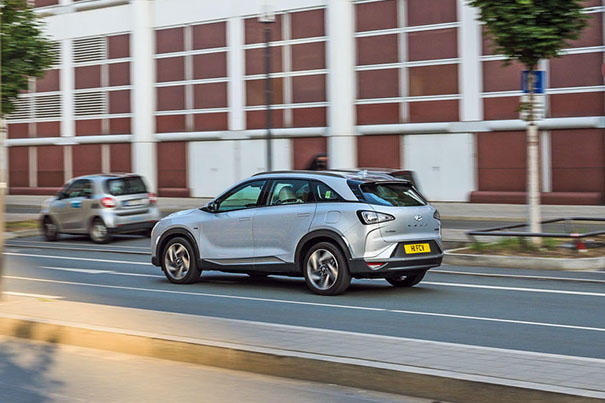 Running at high speeds like these is less than wise anyway, with the Nexo’s hydrogen consumption increasing exponentially, as with any car. And as with any EV, you need to be aware of the whereabouts of your nearest hydrogen station. On mainland Europe, they’re more evenly spread than in Britain, making the trip to Frankfurt less reckless than it sounds. You don’t need to plan for an hour or three kicking your heels waiting for your EV’s battery to charge, either, as colleague Julian Rendell did when he used a Jaguar I-Pace for the same trip to Germany (‘On a charge’, 2 October). A fill at Rainham in Essex was enough to get us to our next station in Belgium, having crossed the Channel by ferry because the Eurotunnel won’t allow fuel-cell vehicles on its trains. Had that station not been functioning (it was unmanned, like the one in Rainham), we had the range to reach another in Belgium. It was open, but for some reason the pump wouldn’t pump without a phone call from my Hyundai PR travelling companion, who was able to have its helpline operator remotely trigger a fill. Apart from this potential inconvenience, there’s also the lesser frustration of not being able to achieve a 100% fill. The closest was a near-as-dammit 97% refuelling at an Air Liquide pump in Frankfurt – the trip computer subsequently estimating a 342-mile range – but more typical is 85%.