Some of them are seen internationally as distinctly odd, but the Russian president observes them all the same. 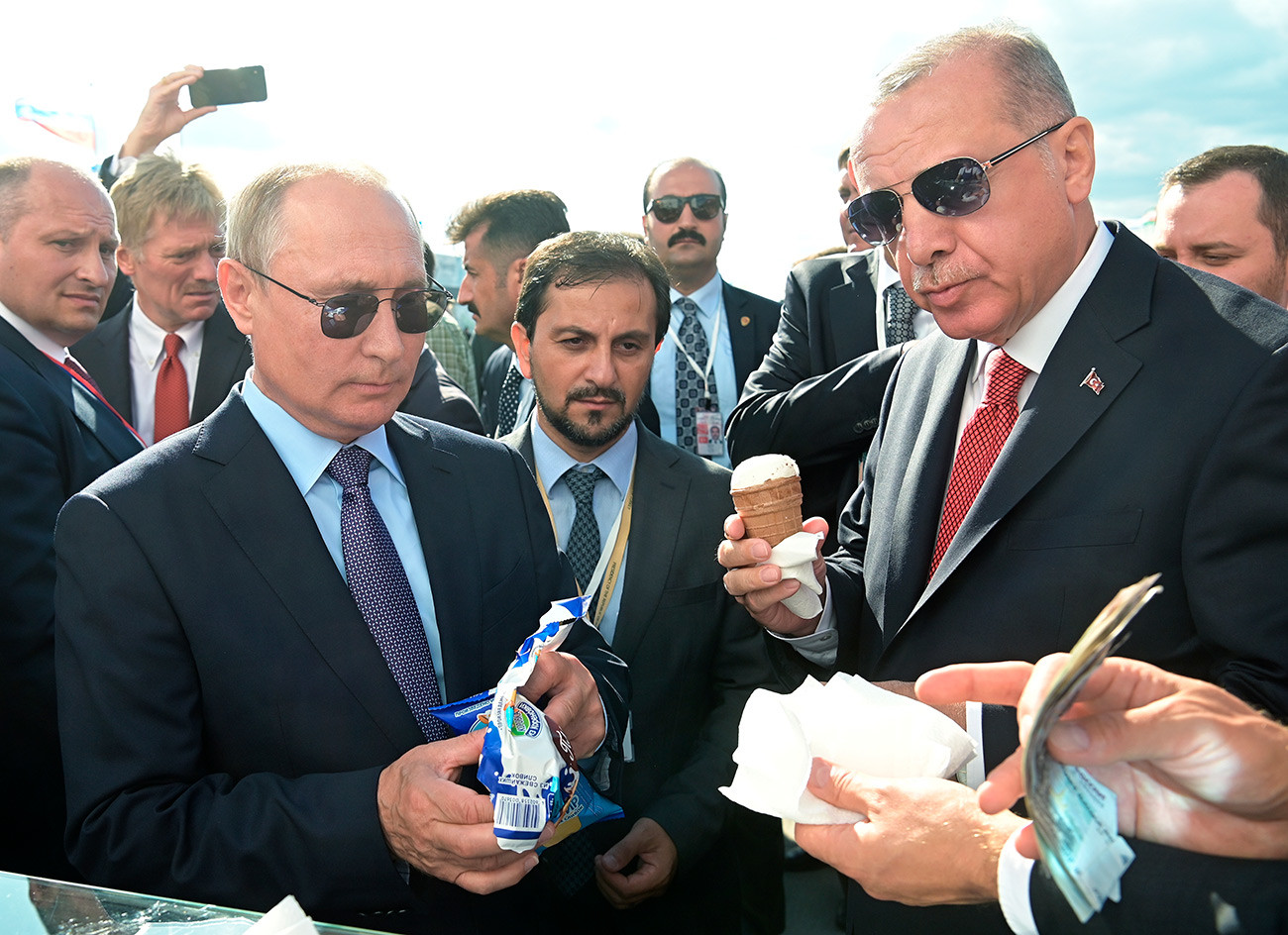 For Putin, buying ice cream at the annual MAKS airshow in has been a tradition since 2005. He bought two ice cream cones for 15 rubles and, handing over 500 rubles to the female vendor, disappeared into his car.

Since then, the president has been buying ice cream for all the VIP guests accompanying him. This year he bought an ice cream for Turkish President Recep Tayyip Erdoğan and others who wanted some, and asked for the change to be passed to Industry and Trade Minister Denis Manturov “for the development of aviation”, as he put it. For himself, Putin chose the same ice cream as two years ago: a ‘plombir’ s in a cardboard cup made by the company Korovka from Korenovka [A little cow from Korenovka]. Over the past two years this ice cream brand, promoted by the president, has gone up in price by 10 rubles.

Taking to the ice 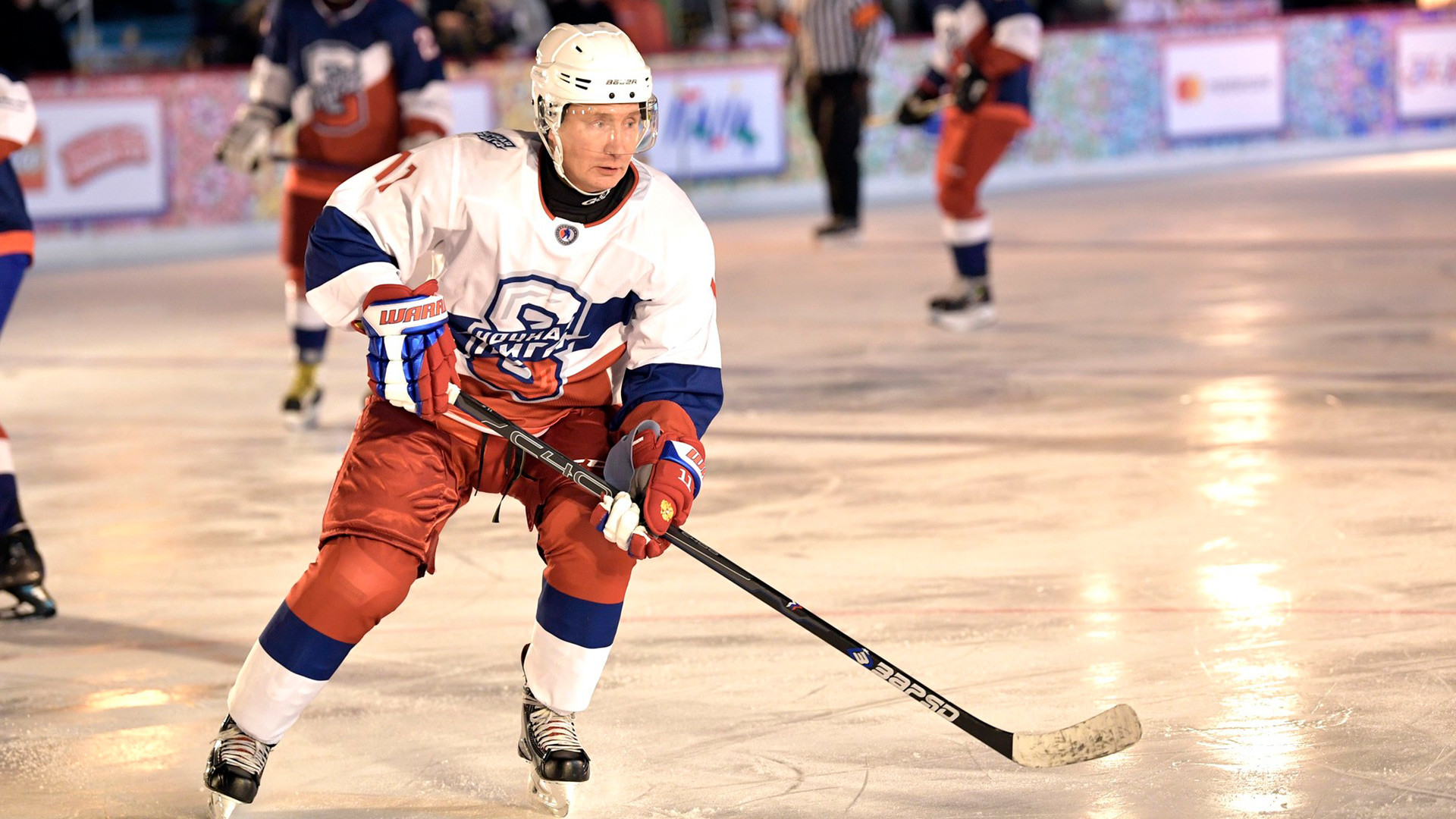 In 2011, Putin suggested setting up a separate ice hockey league for amateurs – the Night Hockey League. Since then he has been playing every year as number 11 at its gala match, together with cabinet members and other politicians. Last time they played, Putin’s team won 14-7 – the president scored eight times. 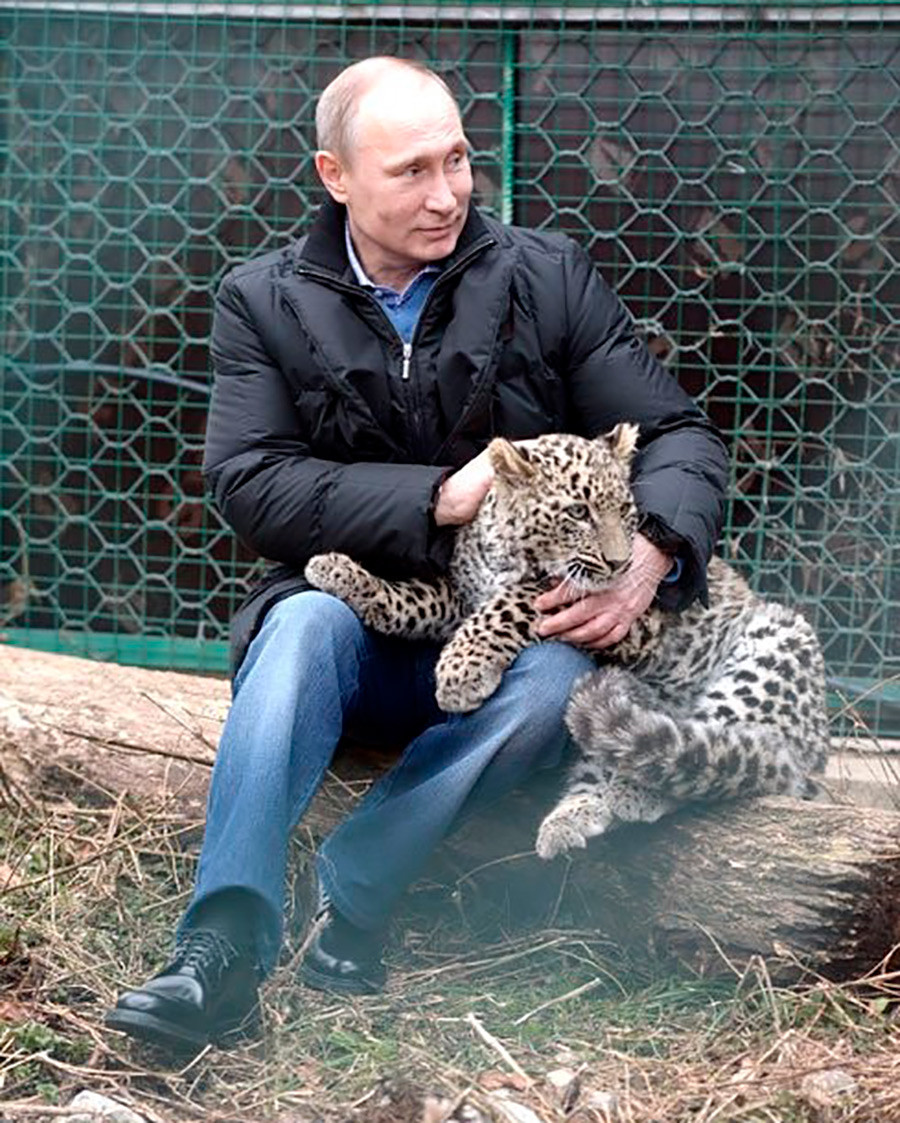 In 2008, Putin was presented with a female Ussuri tiger cub for his birthday, and it must have started from there. Two years later he fed a newborn elk from a bottle and in the same year, during a polar expedition to Franz Josef Land, fitted a polar bear with a satellite tracking collar. In 2012, on a motorized hang glider, he flew with Siberian white cranes, showing them the way south. In 2013, at a marine oceanarium, he shook the paw of a walrus and in 2014 hugged a Persian leopard in Sochi. The last animals the president has fraternized with were an Orlov Trotter horse and a Taigan puppy from Kyrgyzstan.

Carrying a portrait of his father 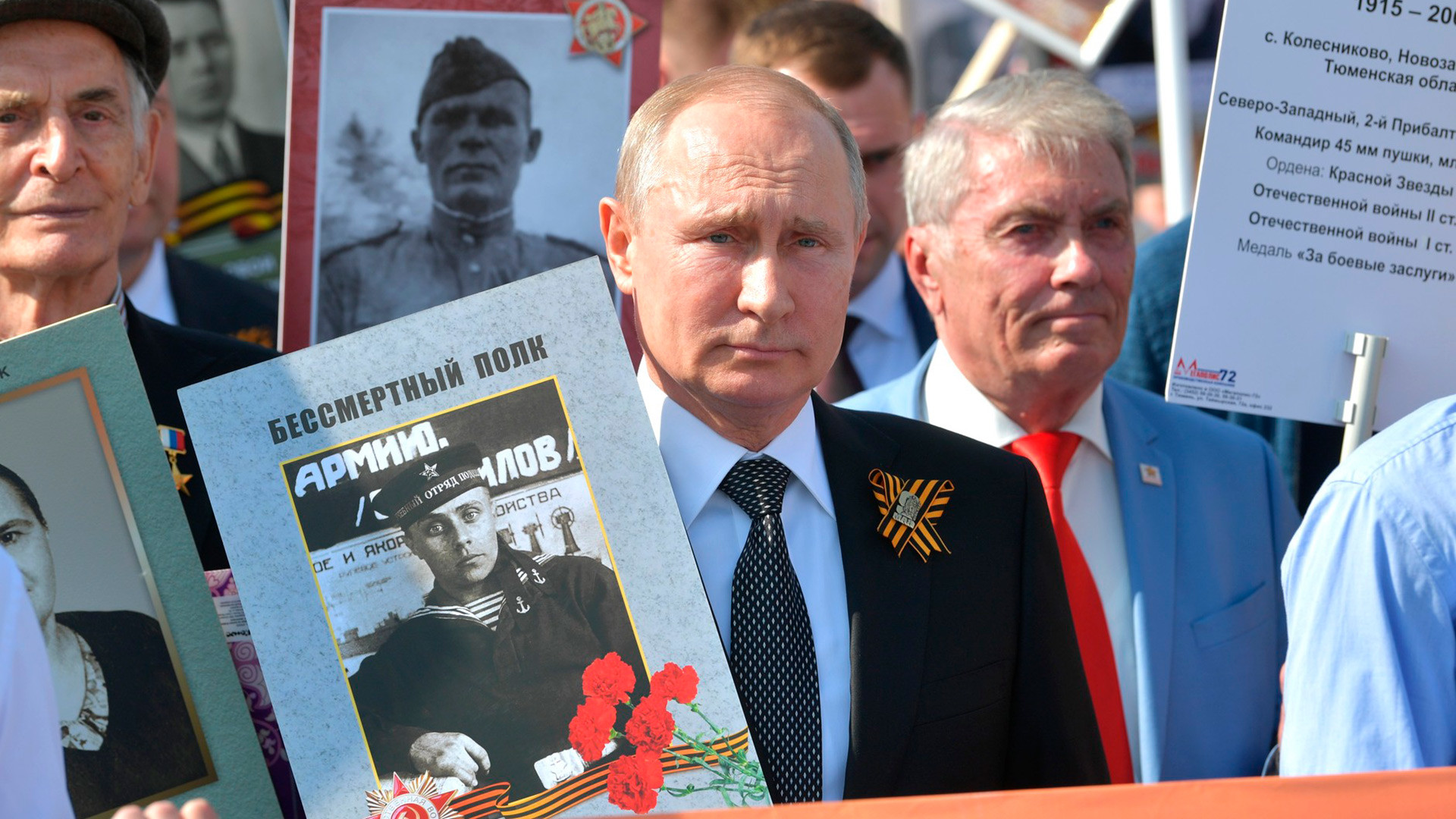 Since 2015, each Victory Day on May 9, Putin has been taking part in the Immortal Regiment marches. He carries a portrait of his father, Vladimir Spiridonovich, who took part in the  breaking of the Siege of Leningrad. Putin described the hardships and heroism of his family in a magazine article in 2015. We covered it here.

Getting behind the wheel 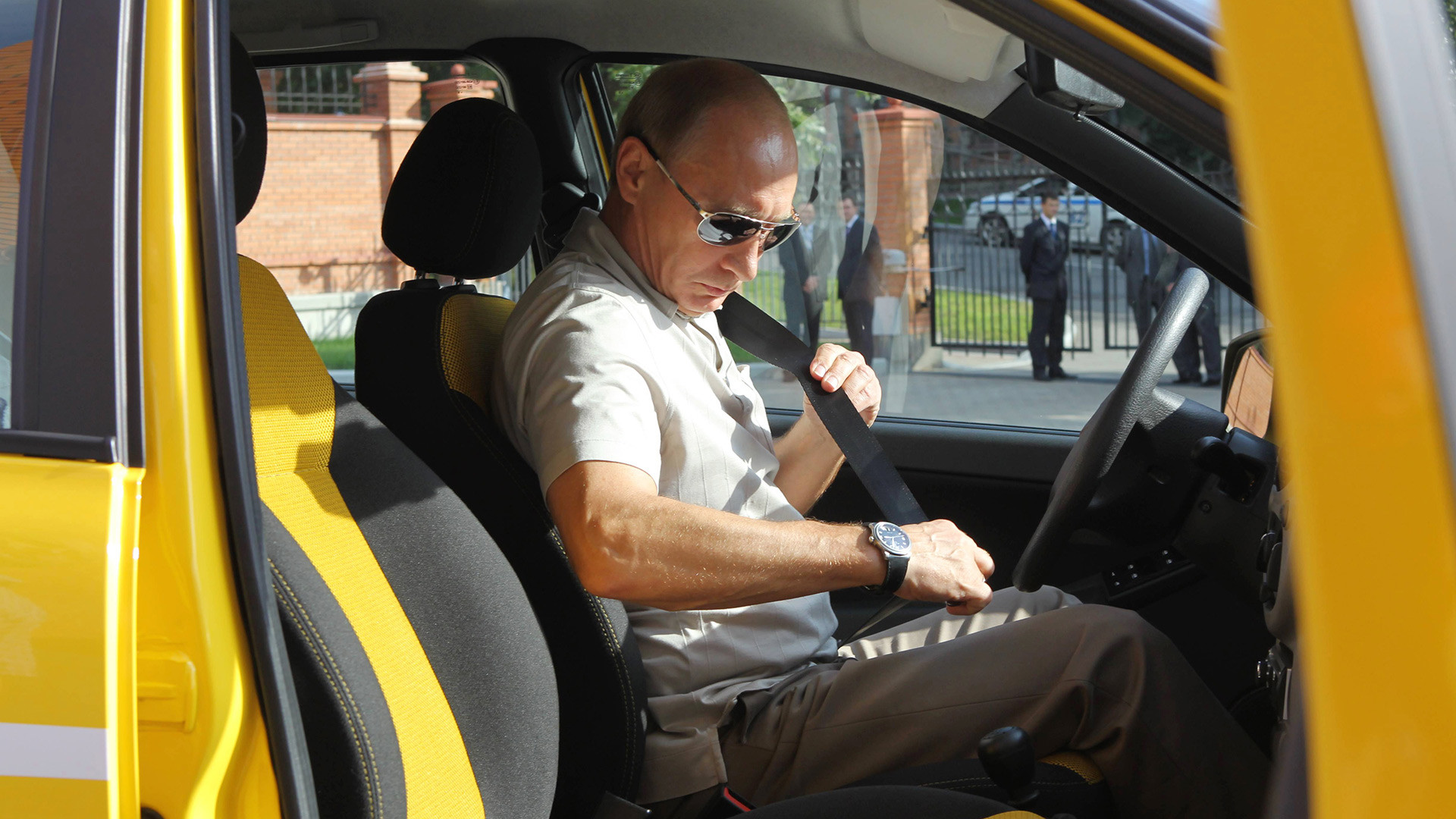 No, Putin doesn’t drive to work every day. But when a special opportunity presents itself, why not? In 2010 he drove 2,200 km along the Chita-Khabarovsk highway in a yellow Lada Kalina supermini. In 2011 he test-drove the Russian Yo-Mobile hybrid car and in 2018 got behind the wheel of a Kamaz truck at the opening of the Crimean Bridge (we have shown in gifs how he did it). But he didn’t stop at automobiles. 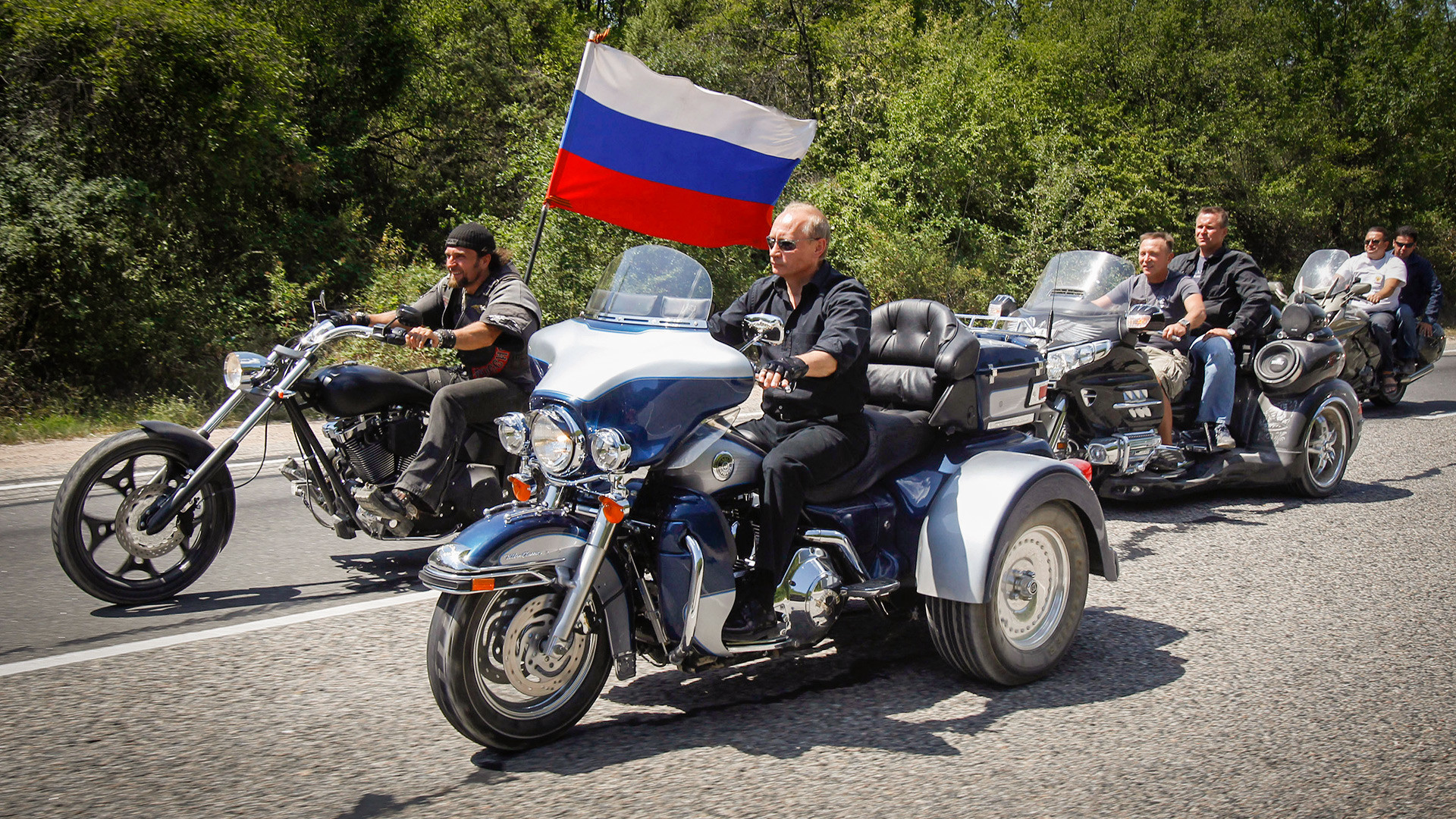 Putin also likes macho outings, i.e. riding a motorbike in the company of rough bikers. He first rode a three-wheel Harley-Davidson in 2010 when attending a Night Wolves bikers’ club rally on the outskirts of Sevastopol. This tradition, like many others, is still alive. In 2019 he rode a Ural at the head of a column of bikers, with the leader of Crimea, Sergei Aksyonov, as a passenger in the sidecar. 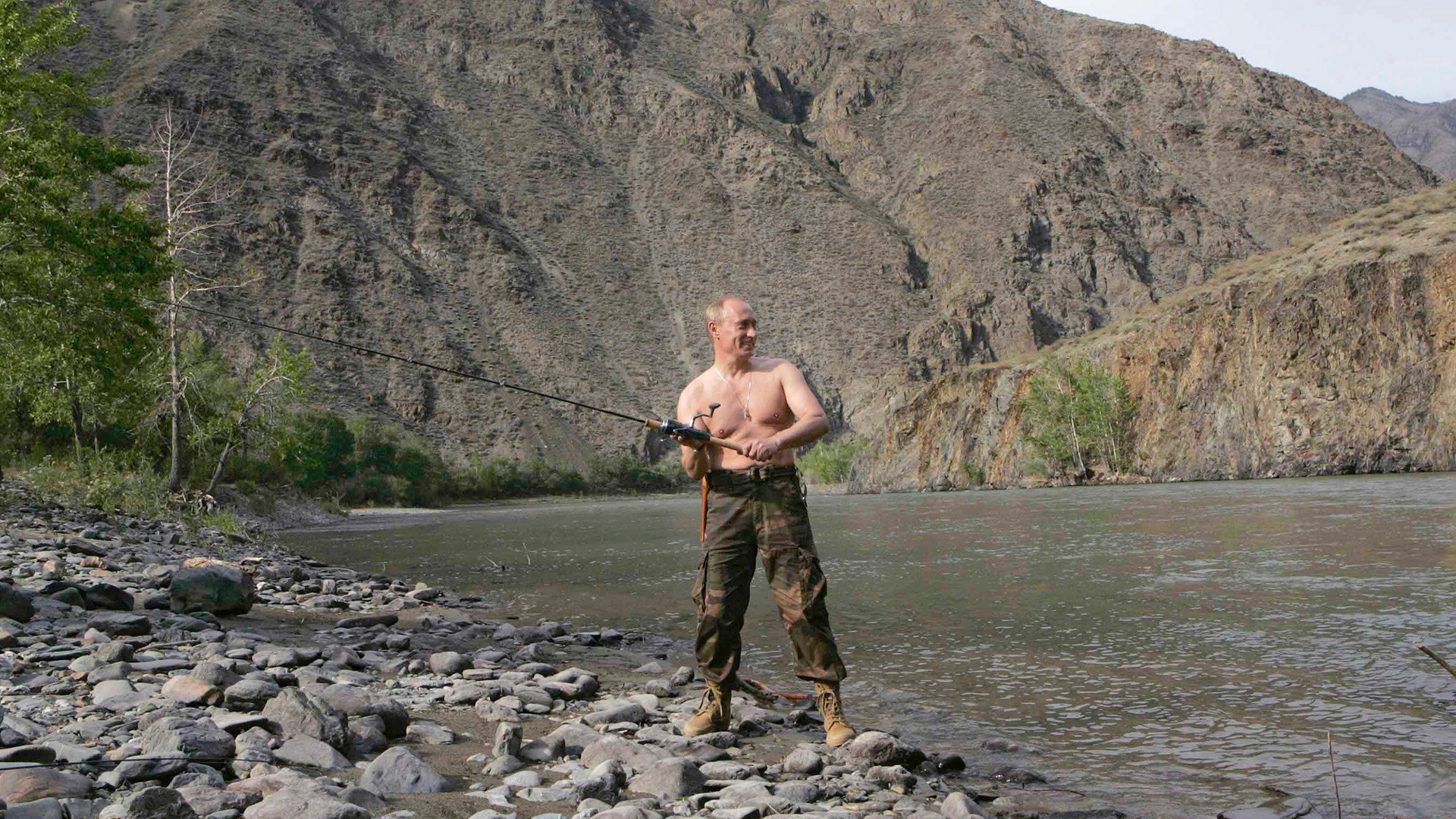 Do you remember Putin bare-chested and all the ensuing memes? The Russian president prefers to take his holidays in isolation from the whole world (we once tried to work out why he does it). Siberia, and in particular Tyva, is ideal in this sense. He takes a holiday in Siberia every year, where he goes fishing in the wild. Sometimes, he brings a guest to keep him company, someone like Prince Albert II of Monaco or Defense Minister Sergei Shoigu. 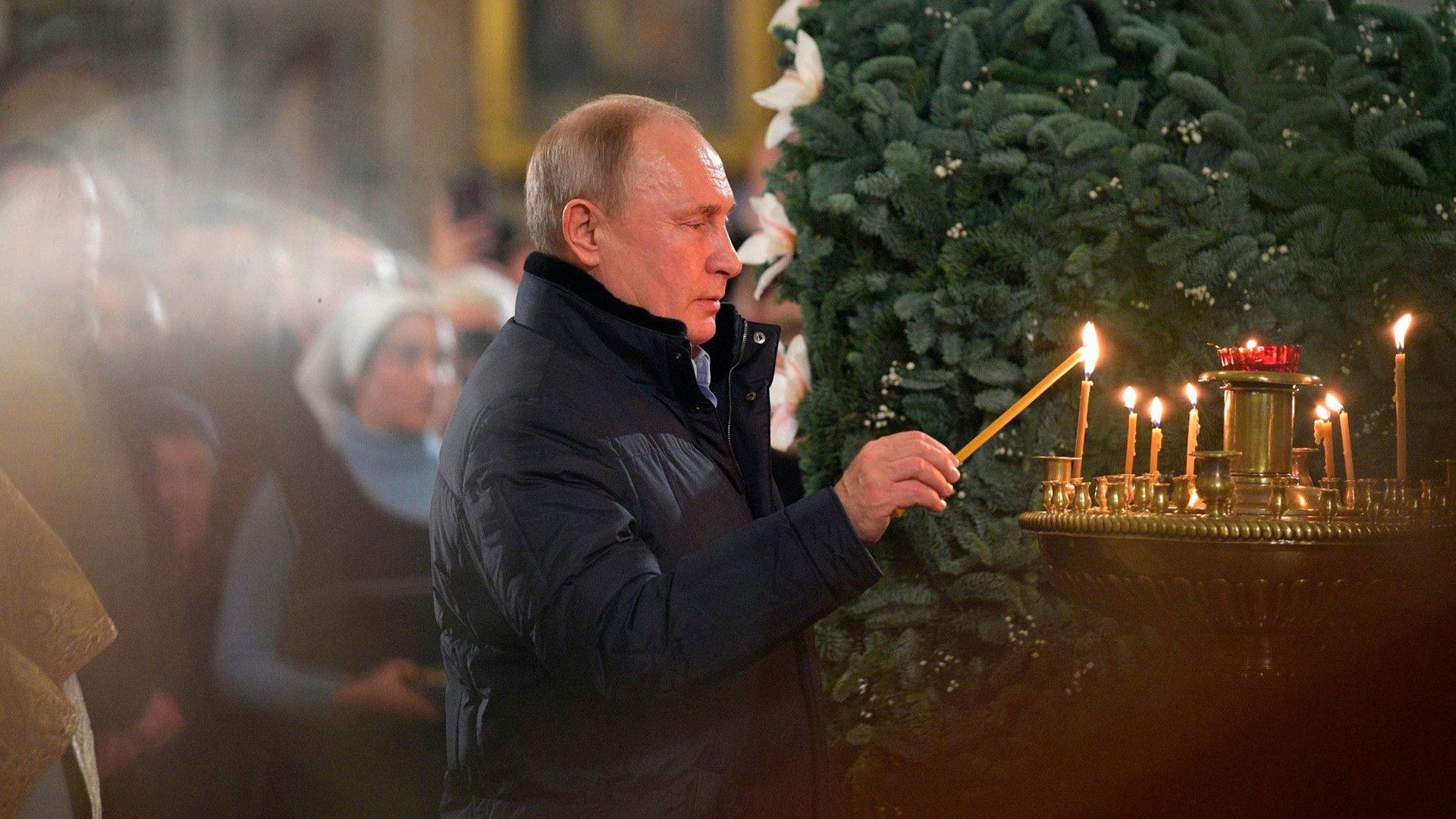 Putin never celebrates Christmas in Moscow in private. Each year, on the night of January 6-7, he goes to church with ordinary parishioners, but always outside the capital. In different years he was in Yakutia, Sochi, the Tver and Voronezh regions, Veliky Novgorod and his native St. Petersburg. Last Christmas it was the Transfiguration Cathedral in which he was baptized in 1952.

Giving puppies as presents to children 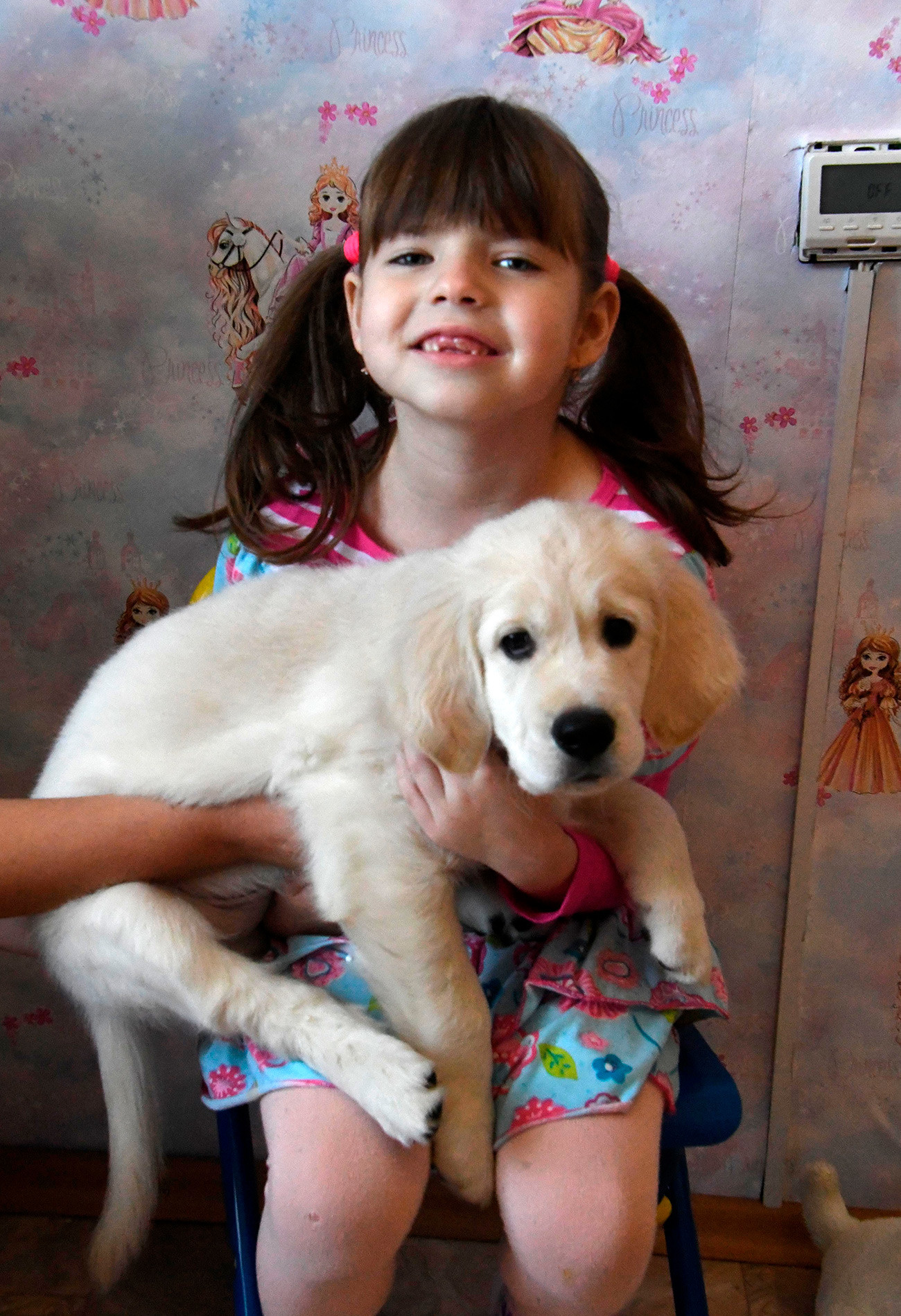 Putin often gives dogs as gifts to children. Several times it’s followed the same scenario: A girl from the provinces who has been dreaming of owning a dog goes on the president’s website and writes him a letter asking for one. It happened with a girl from Bryansk, to whom the president gave a one-month-old Labrador as a present, and to a schoolgirl from Khakassia, who received a Husky from the president, and to a girl with autism from Maritime Territory – she has a Golden Retriever from the president. Still, this is not an exhaustive list of the dogs that happy children have received from Putin. 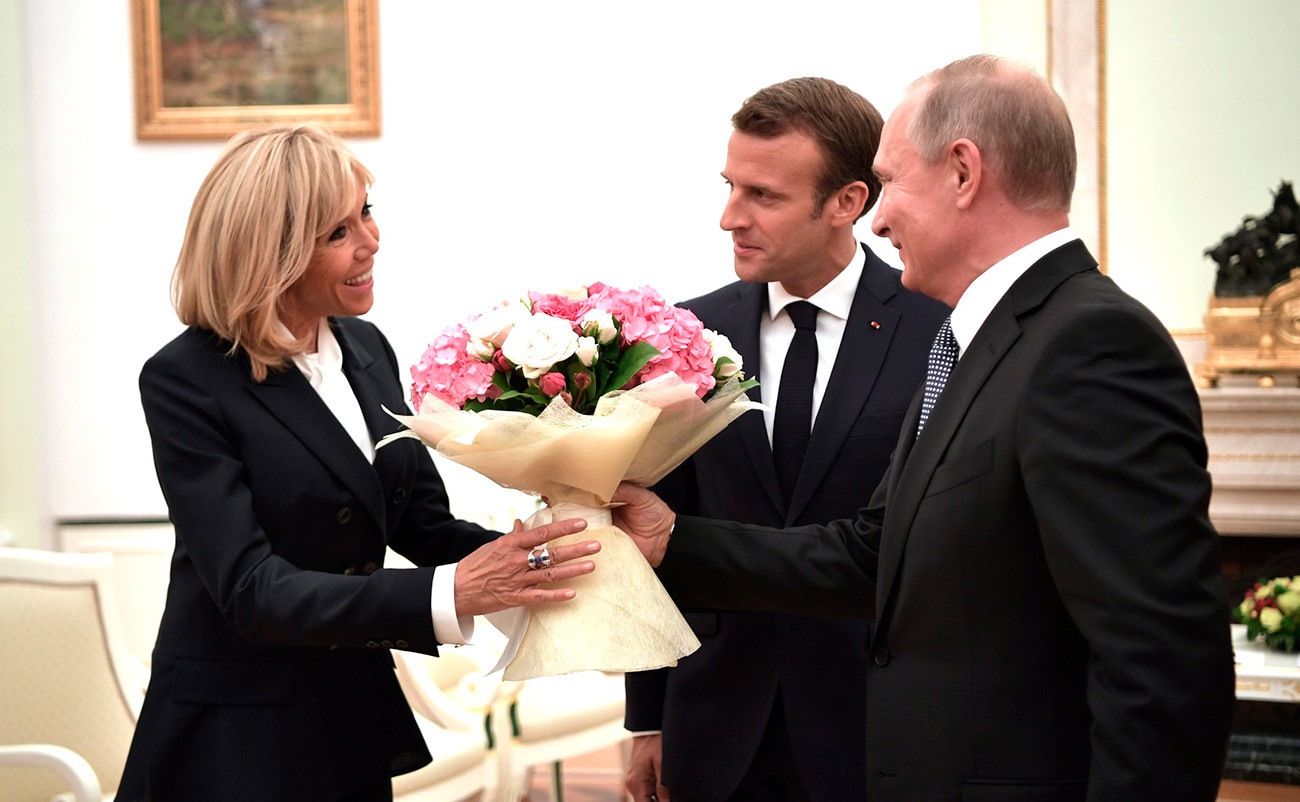 Although it isn’t a very original gesture, it is not widespread in the sphere of international relations. Putin likes giving flowers as a courtesy to first ladies and female heads of foreign states. Croatia’s President Kolinda Grabar-Kitarović got flowers from him, as did the spouse of the French president, Brigitte Macron, and German Chancellor Angela Merkel. However, in Merkel’s case, German journalists saw a different subtext in it, alleging that the flowers made the chancellor look like a feeble woman. The Kremlin didn’t agree with this interpretation.

Drinking from his own mug 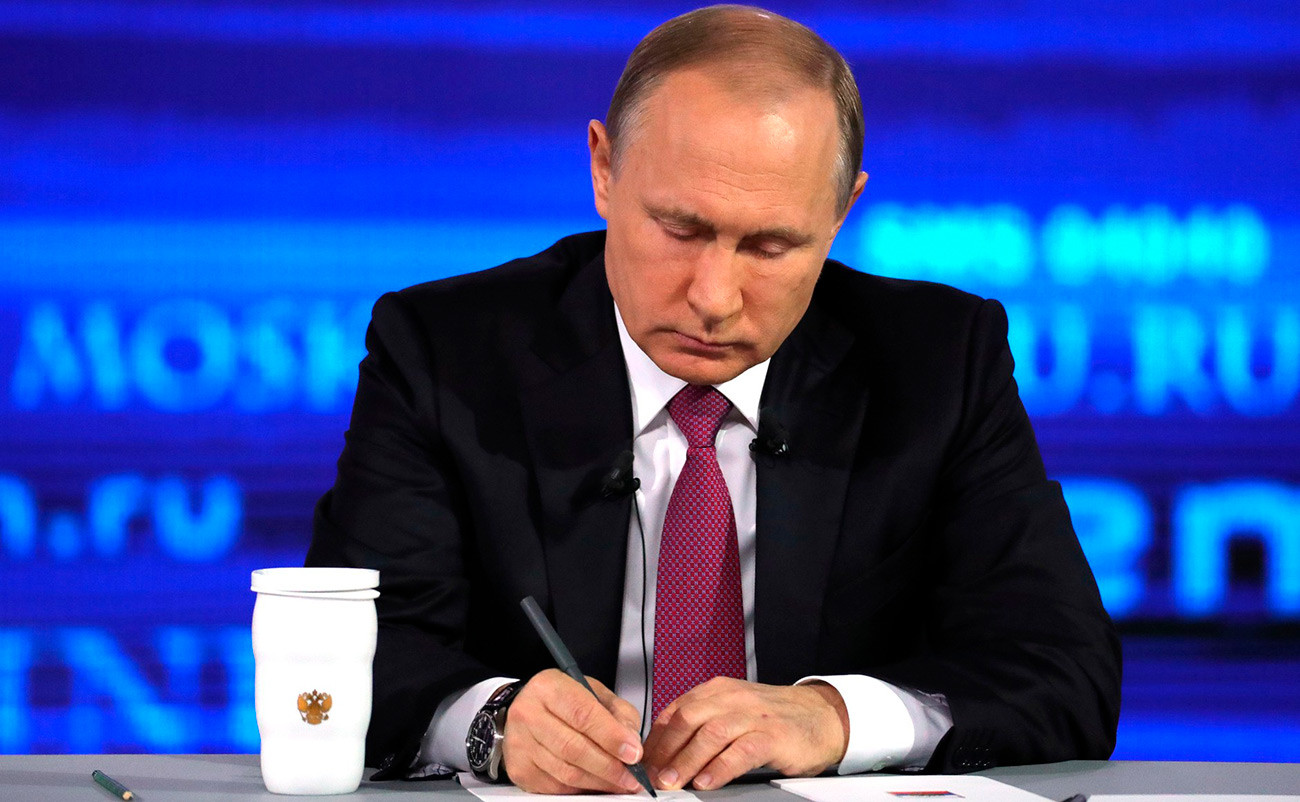 In 2019 a white heat-retaining mug “like Putin’s” was a bestseller on the AliExpress e-commerce site. It started after social media users noticed that at a G20 summit Putin was the only one drinking from his own mug at a dinner. However, the president has been taking the mug to many important news conferences, summits and “phone-ins” for years – since 2014, in fact. According to his press secretary, Putin “is always drinking tea from this thermos”. Why he does it, is not explained. Perhaps, it’s force of habit.

If using any of Russia Beyond’s content, partly or in full, always provide an active hyperlink to the original material.