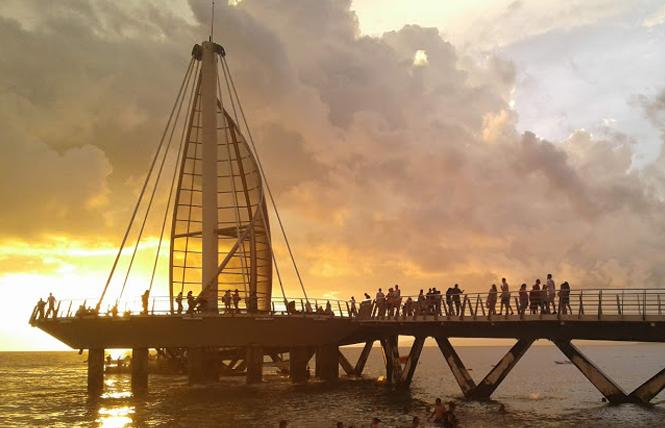 Visitors are drawn to sunset at the pier on Los Muertos Beach. Photo: Ed Walsh

If you are on a tight travel budget, the best time to visit Puerto Vallarta, Mexico, is right now. Anytime you can get an airfare under $400 from the Bay Area you are doing well, and right now, round-trip fares for fall flights to Puerto Vallarta are as low as $300. Hotel rates are also cheap if you can get away before Thanksgiving. Room rates begin to creep up around mid-October. The summer through early fall is the rainy season in Puerto Vallarta but it generally rains in the evening, so if you do go this time of year, you probably won’t have a whole day that is rained out.

Puerto Vallarta continues to be the most popular gay beach destination in Mexico and its LGBT popularity is showing no signs of slowing down. Two new upscale gay nightclubs opened just this year. The new additions are Code, where the famed Club Paco Paco used to be, and Industry, which bills itself as Puerto Vallarta’s largest gay nightclub. Industry is next to what may be the city’s second-largest gay nightclub, CC Slaughters.

The gay village in Puerto Vallarta is centered around the intersection of Lazaro Cardenas and Ignacio L. Vallarta. Nine gay bars and nightclubs, including Code and Industry, are in a block radius of that crossing. The gay sauna, Spartacus, is also on that corner. The neighborhood is known as Zona Romantica, the South Side or Old Town, the latter being a misnomer since downtown, just north of Zona Romantica, is much older than Old Town.

Puerto Vallarta is also fortunate to have some of the best gay hotels in the world, including Hotel Mercurio, Casa Cupula, and Pinata PV, all of which are gay-owned. The hotels are all within easy walking distance to the city’s unofficial gay beach, Blue Chairs Beach, which is part of Playa de Los Muertos Beach, in the Zona Romantica area in front of the Blue Chairs Hotel.

If you want to hang at the gay beach, you can either lay a towel on the sand for free or sit on a beach chair under an umbrella, as long as you buy food or drink from the concession that owns the chairs and umbrellas. The straight-friendly Mantamar Beach Club is next to the Blue Chairs beach and includes an infinity pool. It costs 600 pesos to enter, or about $30. For a much more intimate experience, check out Casa Cupula’s clothing-optional Pool Club, which includes a pool, hot tub, and bar with beautiful views of the city. It costs 250 pesos to enter, or about $13, and includes two free drinks. Casa Cupula also hosts a DJ party every Saturday afternoon.

The fabulous Hotel Mercurio also hosts a happy hour daily, from 3 to 8 p.m., with food and drink specials. Mercurio’s Sunday Beers, Boys, and Burgers party is legendary. Mercurio is also a great place to stop by for light bites during the day.

Piñata PV hosts a very popular men-only social every Saturday starting at 8 p.m. The hotel’s courtyard pool, spa, and sauna overflow for this fab event. It ends at 11 so guests can get some rest. But if you want to keep the party going, fear not. PV’s nightclubs don’t really get started until after midnight.

While there are no lesbian bars in PV, almost all of the gay bars in the city are very women-friendly, with the notable exception of the three male strip bars, Anthropology, Wet, and 69. The smaller gay bars are busiest before midnight, including Apaches, Divas, Reinas, Garbo, and Blondies PV. The fabulous Bar Frida is celebrating its 18th year in business as an LGBT Puerto Vallarta institution. It’s a great place to mix it up with locals, with some of the best drinks in town. Frida’s Kitchen serves up comfort food at bargain prices from 1 p.m. to 1 a.m.

Daylife
The beach and pool clubs at Mantamar and Casa Cupula are great alternatives if you want to do more than just hang at the beach. The newest daytime option is Rainbow Palms Resort (https://www.facebook.com/rainbowpalms/). It is about a 25-minute drive, or about a 35-minute bus ride, south of Zona Romantica. The resort has a pool overlooking the bay with cavernous playrooms. Plans are to open it for weekly parties. The resort will also be open soon for overnight stays. Eight rooms on the property are being renovated from top to bottom for a great gay getaway from Puerto Vallarta while still being an easy Uber or bus ride from the center of town.

Diana’s Tours (http://www.dianastours.com) boat excursion has been an LGBT tradition in Puerto Vallarta for two decades. It is run by Diana DeCosta, a Canadian expat lesbian who has been keeping regulars coming back year after year. The tour runs every Thursday and includes a continental breakfast and stop for a beachfront lunch. The first stop is at Puerto Vallarta’s famed Los Arcos, giant rocks with hollow swim-through passages. Diana’s Thursday tours are made up mostly of gay men but are also straight-friendly. The Wet and Wild tour (https://pvsunsetpartycruise.com/) is marketed to gay men, and, as the name implies, is a sexually-charged version of Diana’s cruise. 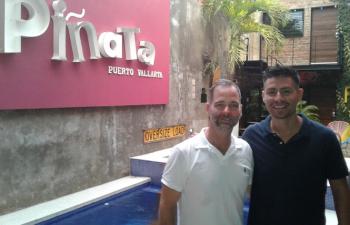 Accommodations
Hotel Mercurio (http://www.hotel-mercurio.com) is perfectly situated in the heart of Zona Romantica, just a block from the beach and in the heart of the gay nightlife scene. It has low prices but with a better-than-budget atmosphere. Besides the location, one of the best parts about the hotel is its great staff and Mercurio’s complimentary delicious made-to-order and buffet breakfast. Many of the staff have been there for years and treat the regulars like family.

The luxury LGBT boutique hotel Casa Cupula (www.casacupula.com) is owned by former San Franciscan Don Pickens and has a deserved reputation for being one of the best quality hotels in Puerto Vallarta. It is in a bucolic hillside but still within easy walking distance to the gay beach and nightlife. Amenities include use of a well-equipped gym and sauna, as well as use of the hotel’s beach club. Its fabulous Taste Restaurant is one of the best restaurants in the city and a must-stop for anyone visiting Puerto Vallarta.

Piñata PV (https://www.pinatapv.com) is between Hotel Mercurio and Casa Cupula in quality and price. The hotel’s rooms are situated around a courtyard with a pool, spa, and steam room. It is a beautiful modern building but with old world retro touches. The hotel is also in a great location, in the heart of the city’s LGBT nightlife and just a short walk to the beach. The hotel is clothing-optional and for men only.

The largest of the hotels that is marketed toward the LGBT community is the Almar Resort (www.almarresort.com/en). The modern luxury beachfront hotel has 79 rooms and is part of the Mantamar Beach Club. The hotel promotes itself as an LGBT hotel and is straight-friendly.

Nightlife
Puerto Vallarta has two gay guides, which are free at LGBT places around town or you can check them out before you leave. The publications are invaluable for the ever-changing nightlife scene in the city. Sadly, Mark Page, a former Bay Area resident and the creator of “Gay Guide Vallarta” (www.gayguidevallarta.com) died in June after an extended illness, but his business partners, Isaac Carachure and Joey Ramon, are carrying on the publication. The city’s other excellent guide is “Out and About PV” (https://outandaboutpv.com/).

As a general rule, the larger nightclubs with a dance floor, including Paco’s Ranch, CC Slaughters, Industry, and Code, tend to be busiest after 1 a.m. Smaller bars like Apaches, La Noche and Mr. Flamingo’s are busier earlier in the evening.

Getting there and around
Alaska and United fly nonstop to Puerto Vallarta from San Francisco International Airport; Southwest flies nonstop from Oakland International Airport. United and Alaska charge extra if you want to bring more than one carry-on bag and the basic fare does not include advanced seat selection. Southwest still doesn’t charge for checked luggage, a consideration if you want to do that.

Don’t forget to pack a pen with you so you can fill out the immigration forms before you land. The airlines pass them out but don’t supply writing instruments. Some airlines don’t supply the second immigration form that you will need, but you can fill it out online and take a copy with you. That will save you a few minutes when you arrive. Here’s a link to the online form: https://www.inm.gob.mx/fmme/publico/en/solicitud.html

After you exit customs in the Puerto Vallarta airport, you will have to wade through the “shark tank,” a gauntlet of timeshare people who will pretend that they want to help you find a taxi or give you transportation information, but they are just there to get you to take a timeshare presentation. No matter how nice they appear, make no eye contact, just walk straight ahead and keep going.

Uber has been operating in the city for a couple of years now and it is the best way to get around. The ride-share service is not allowed to pick up passengers in front of the airport. You have to walk a few extra steps and pick it up at the bus stop next to the pedestrian bridge. To get there, just turn left when you exit the airport. At the end of the airport building, you will see the pedestrian bridge on your left. The bus stop is right in front of it. If you don’t have a data plan that works for Mexico, the airport has free Wi-Fi. You can also get an Uber on the other side of the pedestrian bridge. The restaurant there, Tacon de Marlin, has free Wi-Fi and the password is posted on the wall. Taxis also hang out in front of the restaurant and you can get a taxi into town for about $12. The airport taxis cost about $18. Uber is as cheap as $7. It’s not customary to tip cab drivers in Mexico but you can give a modest tip if the taxi driver helps you with your bags or provides above-and-beyond service.